What we know about Solomon’s Temple

The on-going, intensive research now being conducted by The Temple Institute, and other groups in Jerusalem, will soon bring us more published

and accessible information on the Temple of Solomon. Until now most of the published descriptions of the temple have been based on the Bible only.

Extra-biblical sources (Ref. 2) describe the Sanhedrin, the Supreme Court of ancient Israel as being housed in a special building in the Temple courtyard named the Chamber of Hewn Stone (Lishkat ha-Gazith).

We have descriptions of the ritual bath (mikvah) used by the high priest. The mikvah was supplied by flowing (“living”) water from the spring called Ein Eitam which is in the hills of Bethlehem near the Pools of Solomon which are still extant. The spring was 23 cubits above the level of the Temple court.
Plan of Solomon’s Temple (Encyclopedia Judaica)

Two chambers in the Temple are named in the Mishnah. One, the Chamber of Secrets, was where the devout placed their gifts in secret. The poor received support from these gifts also in secret. The Chamber of Utensils was also a room for storing gifts from which distribution was made every 30 days.

The vaulted Chamber of the Hearth (also mentioned in the Mishnah) was the room the eldest sons could stay and young priests sleep with the keys of the Temple Court in their custody. A fired burned continuously there to keep the occupants warm.

Incense for the temple was prepared by a family named Abtinas in the upper story of a special building in the courtyard, the Chamber of Abtinas.

We can easily imagine that rooms were needed for wood storage, for extra copies of the sacred vessels, for priestly garment storage, for temple records. Access tunnels came into the temple underground (according to more than one historical account) and some of the storage rooms were underground. These underground rooms and tunnels have apparently not been cleared, entered nor explored since the destruction of Solomon’s Temple on the 9th of Av, 586 BC! 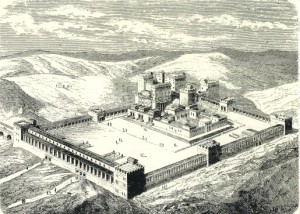 Artist’s sketch of the Temple in Jerusalem (probably Herod’s enlargement of the Second Temple) looking Northwest.
The Fortress Antonia is immediately to the right ot the Temple compound.